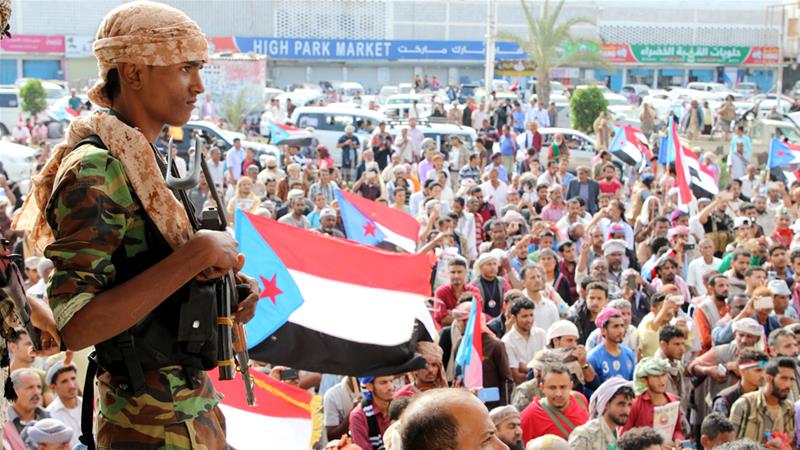 James Raftery is a political analyst and writer who graduated from King’s in January after completing his MA in Middle Eastern Studies. In this article, he looks at the possibilities of resolving the political conflict between the Yemeni central government and the STC to prevent an escalation of the civil war against the Houthis.

Yemen’s war is a humanitarian catastrophe, marked by combatants with a myriad of competing interests and the widespread involvement of regional powers. The Southern Transitional Council (STC) is nominally allied to the government in the war, yet its recent actions in southern Yemen have revived its secessionist conflict with the government. Yemen’s civil war against Houthi rebels and the COVID-19 outbreak make this dispute all the more dangerous. However, there are opportunities for negotiation, mediation and conflict resolution between Yemen’s government and the STC.

Yemen’s government has been involved since 2015 in a civil war against Houthi rebels, who took control of its Sana’a base in 2014. The STC is part of the Saudi-backed coalition against the Houthis. It is a political body and secessionist movement seeking independence for South Yemen. In August 2019, the STC captured Aden from the central government, shifting the centre of the war southwards and focussing attention onto the question of southern independence.

In November 2019, the government and the STC signed the Riyadh Agreement, a power-sharing deal which sought to create a unified government in order to effectively fight against the Houthis. However, in April 2020 the STC declared self-rule in Aden and southern provinces, threatening further instability in southern Yemen and increasing the risk of conflict in the area. This was partly a response to what secessionists saw as the government’s slow implementation of the Riyadh Agreement.

Within the STC dispute, the government wishes to return to Aden and establish military control over the south, in order to effectively fight Houthi rebels, and attempt to unify a divided country. The STC, seeks political authority over southern territories and international recognition for its role in supporting the coalition and government in the Houthi conflict. Ultimately, it seeks to re-establish the South Yemen republic, through force if need be.

Each party’s BATNA – best alternative to a negotiated agreement – is the most advantageous course of action that each party could take should potential negotiations fail. Should potential talks following April’s STC announcement break down, the government’s BATNA will be a continuation of the war against the Houthis accompanied by a collapsed Riyadh Agreement. Discord between the STC and the government would make fighting the war more difficult, and increase the risk of conflict between the two parties. The STC’s BATNA is a situation where it claims governing legitimacy over southern Yemen, including Aden. This would likely entail economic deterioration, with non-STC southern politicians and officials frustrating efforts to govern.

Both these scenarios would occur against the backdrop of the ongoing civil war against the Houthis and the associated humanitarian crisis. This will grow more severe as the country is hit by COVID-19. These issues make governing more difficult for both parties in each of their BATNAs.

The ‘bargaining space’ is the area in which both parties achieve more than they would when achieving their BATNAs. Though such negotiations are often understood as zero-sum games, where one party’s gain is the other’s loss, the twin crises of civil war and COVID-19 may help relax this assumption. There are clearly common gains to be achieved from the government working with the STC, primary among which is the possibility of a united front focussed specifically on neutralising the Houthi threat. Most of the rebel fighting is located in northern Yemen, so these benefits would be felt more by the government than by the STC. This, in turn, may make compromise more appealing to the former than the latter.

The bargaining space would be a range of scenarios similar to the Riyadh Agreement. In such circumstances, the possibility of a sub-conflict between the STC and central government would be greatly reduced. This would consequently facilitate focussed and collaborative efforts between the STC and the government to defeat Houthi rebels. This bargaining space may also include power-sharing arrangements with a degree of representation for STC officials. Varying degrees of representation would map onto various positions within the bargaining space.

There is potential for a third-party mediator to help the two sides resolve their conflict, just as Saudi Arabia brokered the deal which led to the Riyadh Agreement. A mediator might employ a range of strategies to find an agreement. One strategy might be communication and facilitation. This involves gaining both parties’ trust and confidence, encouraging meaningful communication and developing a framework for understanding. In this case, the mediator might serve as a trustworthy channel between the government and the STC facilitating the exchange of information and demands. A mediator might encourage both parties to reach an agreement by reinforcing the dangers posed by Houthi rebels and COVID-19, and emphasising the need for cooperation. A mediator could also employ a more directive strategy, including assuming responsibility for ensuring both sides’ compliance with the new agreement through a series of incentives, financial, political or otherwise.

Ultimately, conflict resolution between Yemen’s government and the STC is plausible in the short term. There are areas within the bargaining space which are preferred by both parties compared to their BATNAs, such as power-sharing with meaningful STC representation and commitments by the STC to disarm. However, mediation to achieve this will be difficult. The strategy of communication and facilitation would help build trust between the government, the STC and the mediator. However, the issue of southern autonomy is deeper than just misunderstanding – the two sides have conflicting political interests and goals. Clear communication and information sharing, though necessary, is unlikely to be sufficient to resolve their differences.

Directive strategies, such as promising of resources and offers of agreement enforcement by the mediator, will be more likely to lead to resolution. Potential mediators such as Saudi Arabia and the UAE already have a stake in, and thus influence over, the conflict. However, both parties need to trust the mediator to follow through on these promises. Neither trusts Saudi Arabia to effectively oversee implementation of the Riyadh Agreement, following its fracture. The Emiratis previously backed the STC and supported the coalition against the Houthis, although their funding of STC paramilitaries may make it harder for the government to trust them. Both the Saudis and the Emiratis will be able to commit fewer resources to resolve the conflict, faced with economic problems thanks to COVID-19 and the oil crash.

Inward-looking NATO members such as the US and the UK have been disinclined in recent years to involve themselves Middle Eastern conflicts. Whilst these nations are preoccupied with their responses to COVID-19, such direct involvement seems unlikely. China may seek to expand its regional influence by involving itself in the conflict. However, the extent of the US’ influence in the region, including positive relationships with Saudi Arabia and Israel, may discourage Chinese intervention.

Even though it may be difficult for mediators to resolve this conflict, the civil war during which it is occurring makes it more beneficial for both parties to come to an agreement. The crises posed by the Houthi rebels and COVID-19 will be more easily solved if the government and the STC can find a way to work together effectively. A compromise was reached in Riyadh last year. Although its breakdown will make establishing a new agreement more difficult, it shows that it is possible.

Dubai, Olfat al-. ‘Federalism Is the Answer to Peacebuilding in South Yemen’. The Washington Institute, 2020. https://www.washingtoninstitute.org/policy-analysis/view/federalism-is-the-answer-to-peacebuilding-in-south-yemen.